The very much expected Halloween night just came and went. So did the Day of the Dead Celebration for Hispanics. I hoped you all enjoyed coming up with your costumes, I know I totally did.

But right now, I want to go back to basics.

I want to talk about one of the most thrilling aspects these two celebrations have in common: life and death (especially death and the in-between).

I want us to appreciate the goosebumps a good horror story used to give us when we were younger. Remember those? We would get them as kids, whenever we got around a copy of “Goosebumps” or we sat down to a Nickelodeon episode of “Are You Afraid of The Dark”?

As a little girl growing up in Guatemala, we also had Leyendas, the Hispanic equivalent to urban horror stories. They are hundreds of years old and they become even more popular around this time of year, when we visit the cemetery and talk freely about wandering, vengeful spirits desperately seeking new souls to snatch.

Now, all grown up, with lesser availability for easy scares and a more skeptical out view on life (after finding out that Santa and the Tooth Fairy are not real); I am disappointed at how we have forgotten about Leyendas. They are a big part of the Day of the Dead traditions and since I still enjoy sharing a good horror story every once in a while (MUA HA HA!).

There is a wide selection of these Hispanic horror stories, the scariest of them all, for some reason, always involve a beautiful woman with a tragic past, thirsty for some innocent children or tainted male souls…

Without further ado, I present the scariest woman in Leyendas:

The Weeping Woman aka “La Llorona”

A long time ago, in a very small rural town, a young, beautiful woman from a humble home named Maria was being wooed by a wealthy rancher. Since she knew just how beautiful she was, she knew she would not settle for anyone less rich or less handsome.

After some months of being wooed, Maria got pregnant and thought her future was secured and that she would become the rich-rancher’s wife. They did not get married and she became pregnant again. The rancher did not care for Maria, and he would leave the small town for months and come back just to visit his children.

On one of his visits he announced he was going to marry a rich woman from the city. He hugged his children and left, not even glancing back at Maria.

Full of rage, Maria grabbed her two little children, dragging them towards the river and shoved their little heads into the water. After a minute, they stopped moving. As the little bodies floated downstream, Maria realized what she’d done.

A day later, Maria’s body was found by the river. She had committed suicide. She was buried without her children because their bodies were not found. Ever since that day, the villagers never come near the river at night and they hear a pained, remorseful cry: “WHERE ARE MY CHILDREN?”

The few that have gotten close enough to see who cries have seen a cursed woman dressed in a long, white robe; walking desperately by the river banks and lake shores, wringing her hands, pulling her long black hair, weeping, while she searches for the two tiny bodies she let go.

The few who have heard the remorseful lamentations say that it is most definitely the Weeping Woman. She will not stop her cries until she finds her children’s lost souls.

If you wander out wherever there’s a river or lake near, you might just hear a pained scream “WHEEREE ARE MY CHILDREEEN?!” 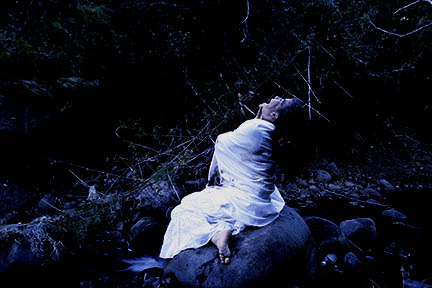