The queen of comedy and daytime show rules as our QUEEN SHEVA of this Wednesday. The heartwarming and always funny: Ellen DeGeneres. 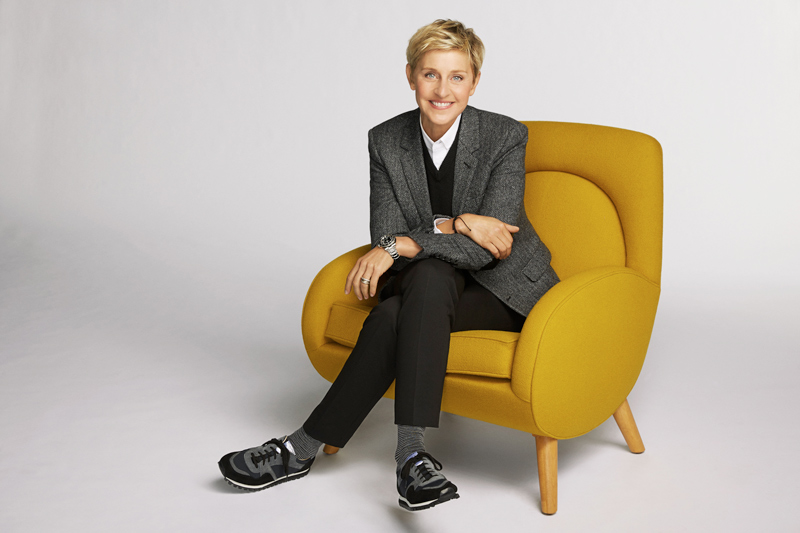 Ellen had a happy and sheltered childhood, who (as she puts it) didn’t know there were gay people or a women’s movement. Her father was an insurance salesmen, so the moved around quite a lot. She learned how to make friends easily by being funny. When she was 13, her parents, Elliot and Betty, divorced. Ellen used her signature move and helped her mom through the divorce with humor. She loved to see her mother laugh. She loved to make someone laughed when they were going through a difficult time.

After graduating high school, she went to the University of New Orleans and dropped out after 1 semester. She didn’t really know what she wanted to do with her life, so she had quite a variety of random jobs like vacuum cleaner salesperson, a law firm’s secretary, waitress, to name a few.

And it was at a public speaking event that she found out she had a knack for live comedy, she was so nervous and afraid of having to speak to a crowd that she used humor to get over it. After that day, she was invited to do stand up comedy around town. She made her way into the biggest show in late night tv, The Tonight Show starring Johnny Carson and made history to being the first female comic to be invited to sit down and chat after her performance. After that performance, she starting doing stand up comedy, as a regular, for many of the daytime tv shows and night time tv shows. And in 1994, she got her very own sitcom show called Ellen.

Ellen was the star of the show Ellen and when Ellen in real life came out on The Oprah Winfrey Show (in case you still didn’t know, Ellen DeGeneres is gay), she talked to the producers of the show about her character Ellen also coming out as gay. The producers were excited but a little nervous. Ellen became the first openly gay lead role on a tv show. Everyone was excited, they even threw “Watch Ellen Coming Out” Parties all over the US. But when some religious groups started protesting and saying that Ellen was “contaminating” the minds of the children. And as a consequence, major advertisers pulled out, the network starting putting “warning” signs before the show and didn’t promote it as much. Ellen was cancelled after the 5th season.

After a few year, some tv and movie roles, Ellen took on the greatest challenge as a comedian. Ellen hosted the Emmy Awards after 9/11 after it had been postponed 2 times. At the time, people didn’t know how to talk to audiences and how to be funny. Ellen did an amazing job and as Entertainment Weekly described it “witty, respectful, and wise”.

And in 2003, she began her adventure as a daytime tv show host of her show The Ellen DeGeneres Show and audiences around the world got to know the real Ellen and fell in love with her. In just the first 3 seasons, the show won 25 Emmy Awards. In the 13 seasons, Ellen has made audiences laugh and cry, has given many free gifts and trips, has invited guests from all over the world (non celebrity) and shared their inspirational stories, and has asked the “tough” questions to her celebrity guests in segments like Truth or Dare. And the dancing, how could I forget the dancing.

Aside from helping countless people on her show, she’s a supporter of the Hurricane Katrina Relief Fund, Feeding America, The Gentle Barn, the Susan G. Komen for the Cure, the LGBT Community, and many many many others.

On the side, she’s the voice of the loving, and forgetful, Dory in Finding Nemo, and coming this summer in Finding Dory. Ellen’s charm transcends into animated characters and audiences love her. On the personal side, Ellen is happily married to wife Portia di Rossi and live at home with their beloved dogs and cats.

Ellen DeGeneres is the nicest, funniest, and most beloved person in the world. She is the queen of comedy and our QUEEN SHEVA.