A natural born leader and team player, our QUEEN SHEVA of this Wednesday is innovating the biggest brand worldwide. The sleek and smart: Angela Ahrendts. 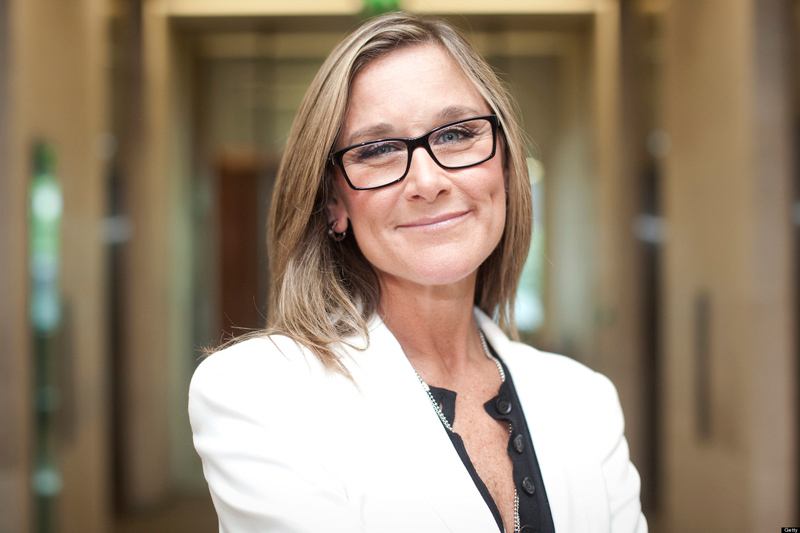 Angela grew up with a philosophical father and a spiritual mother that taught her about life, culture, and empathy. The third of six children, Angela thought she wanted to be a fashion designer. While she was in Ball State University, she realized she wasn’t as “creative” as she thought compared to all her classmates. But she had a knack for helping others how to improve their designs and how to market them. That’s when she learned about the term “merchandising”.

After graduating from college, she moved to New York to pursue a career in the fashion industry. Angela worked her way up through brands like Warnaco, Donna Karan, Henri Bendel, Liz Claiborne, and eventually made it to CEO at Burberry. On her journey, she learned a “little something” in every company.

At the time when Angela became Burberry’s CEO (2006), everyone worked on Saturday and the brand was not doing very well. Her mission was to turn everything inside the company right-side up to reclaim its’ roots and bring it back to being a luxury brand at its finest. From bridging retail and online, company culture, and creating the “Check Cares” for the Burberry Foundation, Angela innovated every aspect of the brand she could her hands on. Let’s just say, in no time Burberry tripled their earnings and no one worked on Saturday.

Angela was at the forefront of fashion innovation, and she knew that technology was a big tool to making a difference in both the consumer experience and the brands internal organization. When iPads became available, she bought one every member of her management group and had Apple Geniuses teach them how to use one. Later, every store worker at Burberry had an iPad. So, we’re not surprised that Apple came knocking on her door in 2013 and asked her to join as Senior Vice President of Retail and Online Stores.

In February 2014, Angela appeared on the cover of Fast Company with a headline that read “Apple’s Next Rockstar”. Her goal was to innovate the store experience, the consumer experience, and to build company culture. During her first 6 months, Angela went on a tour visiting more than a 100 Apple stores to talk to all the employees and see for herself what everyone was doing. She quotes her dad quoting Abe Lincoln “It is better to remain silent and be thought a fool than to open your mouth and relieve them of all doubt.” She watched and listened, before she did anything. The first things she did included integrating online and store sales (just as she did on Burberry), a choice of t-shirt and polo for the store employees and moving the iPods to the back of the store. In just a short time, Angela has made a quite an impact on Apple and she’s just getting started. She’s changing the Apple store experience and has big ideas on what it’s going to be.

Angela is a born leader and has always asked herself “What’s best for the company?”. Her track record and future ideas make her an inspirational QUEEN SHEVA.

Here’s a TEDx Talk she did on the Power of Human Energy: