It’s been three months since I moved into my six foot-by-six foot hidden orange room behind the washing machines of a popular hostel in Guatemala City. Everyday for the past three months, I wake-up to the sounds of Guatemalan rush hour streaming in through the glass slats of my crumbling window, and I’ve trained my mind to interpret the rumbling of diesel and wheels of the several thousand cars on the streets outside as rushing water upon the rocks of the campgrounds of my childhood. The ones where I’d wake up in a patch of sunlight on the riverbank and sip the beauty and clarity of the natural world around me– a world far from Guatemala City.

I live a humble life in Guatemala, and that’s what I like about my life in Guatemala.  I have one, big mochila (I’m learning Spanish, so just go with it) and a small suitcase that I stuffed with nothing but books and plays, as I teach at the university across the street.  I wake up early and go to bed late. My students are around my age, and yet, due to my position, I cannot interact with them familiarly– and that’s a good thing, but it’s hard. Accordingly, the people at the hostel where I live are simply passing-through, and any time I get close to someone, they leave. At the end of my days, I return to my orange room alone. I then wake up to the same sounds of that same babbling brook, and I do it all over again.

The people I spend the most time with in my humble life are the hostel’s maids, and it wasn’t until my Spanish improved that they began to open up to me, and I was able to understand them. They’re my friends, and I never let them pick up after me– and yet, everyday I return to my orange room and it’s just a little bit tidier than when I left it. One day, after the loss of a friend back in America, they could tell I was a little sad– moreover, they were the only ones paying attention. I woke up the next morning to find flowers outside my door atop the washing machine. They were for me. They were from the maids.

This morning, and I didn’t know it was El Día de la Mamá, I didn’t want to get out of bed despite having nightmares all night long. I didn’t want to do my crammed calisthenics on the cold strip of floor next to my hard bed. I didn’t want to go to school. I projected a bad day ahead, but duty called, and I took my shower, and I got ready and sat on my favorite stool of the hostel kitchen and waited. I was waiting for the maids. My friends. When Lorena walked in, the tiniest woman you’ve even seen with skin like leather and a gap toothed smile, I couldn’t help but smile at how beautiful she looked. She had fixed her hair into tight curls and wore earrings that caught the light that streamed through the glass slats of yet another crumbling window. She dressed in a plethora of pinks that matched the pigment in her cheeks.

“Gracias, Maria,” said Lorena sheepishly. She then sat down on the stool next to me with her feet a good foot off the ground, and she began to tell me about her daughter– how her daughter was in her final year at the Universidad de San Carlos, the public university in the city, and how she was so proud of her. I then asked her if she had any other children. She smiled and replied in Spanish, “No, you only have one child when you have a bad marriage.”

She then told me of the small pueblo from which she came. It’s five hours away, close to the beach, but her life couldn’t have been more different than the bikinis and piña-coladas of the coastal tourist towns. No, Lorena had been in an arranged marriage with a man that abused her. She then left her husband with her daughter and made the 5-hour trek to the city– and now her daughter’s about to graduate from a university.

Tears gathered in my eyes, but not hers. No, this was a proud mama– and nothing, not even her past was going to ruin the enjoyment of this day, El Día de la Mamá.

Into the kitchen walked Ines, the other maid, much younger than Lorena, with flowers in her hands. “Aquí, Lorena. Feliz Día de la Mamá.”

“Gracias, Ines. Donde es Flora?” Flora is the last of the maids. She just turned 18. She’s the daughter of Ines.

“I needed to get the flowers, so I left early,” replies Ines, “but Flora is on her way.”

They then shared a moment– and I, but a humble fly on the wall of a place I now loved, watched and was inspired, for I knew Ines’ story was the same as Lorena’s. Ines had Flora when she was 16 after being arranged with a man more than double her age– but that’s the past, and today, well today is El Día de la Mamá. I rapped my long gringa arms around both of them and thanked them, for they didn’t realize that they had also been mothers to me since the day I arrived. They both kissed me, and I went to school.

This country and the life I live in it are a lot to handle at times. It’s lonely. I get sick a lot. I get a little tired of frijoles. I get exhausted from my 12-hour work-days. The friends I make at the hostel leave, as did the one person I was falling in love with. I can’t sleep some nights from the mosquitos buzzing around my ears. I can’t call my own mother on Mother’s Day, because the connection’s so poor– and on top of all of this, I wake up every morning to the sound of rush hour.

They’re always there for me. Lorena and Ines. They give me hugs and food– oh, lots of food! They talk to me. They want to know more about me. They love me, and today, I became a part of their family, a family of resilient women– of women, otherwise alone in the world, except that they’ve made the world theirs. They did not succumb to their circumstances; they seized more.

As I walked to work, I saw dozens of Lorenas and Ines’s on the streets– flowers in their hands, gapped-toothed smiles. Today is for the women that took their circumstances and thrived anyway.  In a country plagued by a horrible ideal of what it means to be a man, here are the women– and they know exactly what they’re about. 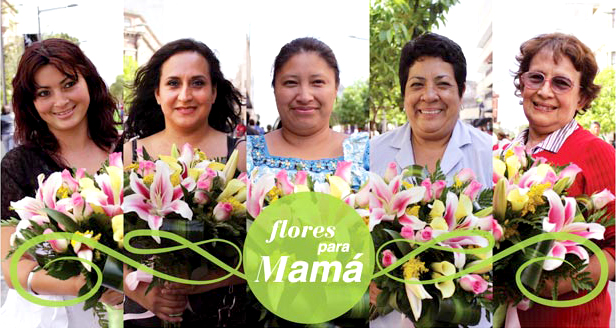